Let’s find HOME for the children. Search for it. Take care. Donate

Let’s find HOME for the children. Search for it. Take care. Donate 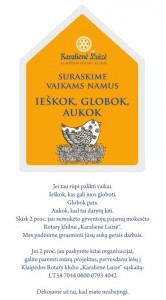 Since the very establishment of the club we visit the children growing up in children care homes – we do not bring them material goods, instead we gift them the joy of communication. We realized that the greatest gift for these children is a family, where the right values ​​are formed, social skills are developed, and opportunities for personal development are open. The sister of our club Enrika already takes care of two teenagers and inspires them by her personal example that there are no unwanted children, there are only undiscovered families.

This project will be aimed at solving the following tasks:

We are convinced that our society should help healing the old wounds of the state. Consequently, Klaipeda Rotary Club “Karalienė Luizė” is joining the initiative of the President of the Republic of Lithuania Dalia Grybauskaitė “For a Secure Lithuania” (lit. “Už saugią Lietuvą”), which calls for joint efforts to change Lithuania.

Every meeting with children is different.

Children of the”Rytas” children care home “Saulutė” foster family already have their own cozy apartment. Together with them, we are happy for the improved living conditions, but the more we get to know them, the more we want to gift them the joy of communicating.

Sometimes we cook in the kitchen and just talk, we light up the Christmas tree in the beginning of winter and drink tea in a cafe, at other times we play board games or compete at the bowling tracks. 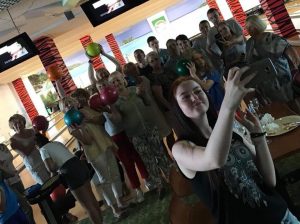 About volunteering – to the children

Our friendship with children was enriched by another meaningful meeting. The teenagers in care homes and gardians’ families were able to learn more about the goals and opportunities of volunteering. We invited more than 50 children from the Klaipėda region children care homes and foster families to the conference – seminar “Volunteering rocks” (lit. “Savanorystė veža”), which took place at the Maritime Museum-Dolphinarium in April 2018.

“We all share valuable experiences. Sometimes we do not think and forget about sharing while taking. I believe that the hearts and minds of children were touched by the dedication to volunteering, the ideas expressed, and the knowledge provided by the speakers”, hoped the club president Jolanta Juškevičienė.

The representatives and volunteers of VšĮ “Klaipėdos Šventės”, “Mission Siberia” (lit. “Misija Sibiras”) and the museum talked about the traditions and opportunities of volunteering.

On the 6th of March 2018 club president Jolanta Juškevičienė and Klaipėda University rector profesor. Eimutis Juzeliūnas have signed an agreement that will help solve child custody problems more effectively, as well as encourage the society to change the attitude to adoption and to open the doors of their homes to children seeking a family.

Depending on the activities of the Rotary Club, the researchers of KU planned the study of children’s custody development and deinstitutionalisation as one of the priority areas of student work of the Department of Social Work of the faculty of Health sciences of Klaipėda University (lit. Klaipėdos Universiteto Sveikatos Mokslų fakultetas”).

Among other arrangements, the Rotary Club has committed a grant to encourage the best student, who chose a research topic on child custody. 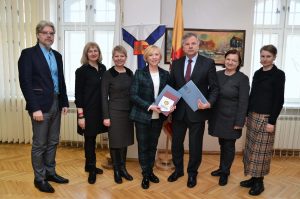 For children – hike with NATO troops

In response to the invitation of the President of the Republic of Lithuania to participate in the “Give a Summer to the Child” (lit. “Padovanok vaikui vasarą”) campaign, we invited the residents of the children care homes to a survivor’s camp with NATO soldiers.

On August 23-24, 2018, at the Brigade General Povilas Plechavičius proving ground in Kairiai, the young participants learned survival in the wildlife tricks, played athletic games with the soldiers, spent time at the bonfire. The program and the hike were prepared by the soldiers of the Lithuanian and the Dutch armies. 15 children from the Klaipėda Children Care House “Rytas” and “Smiltelė” and family-living teenagers from the age of 14 to 17, including six girls, were interested in participating in the survival trip.

“This hike is an example of peace, communion and responsibility. It’s a reminder that all children, no matter where they grow up, are important and precious. We care about them. We are in contact with the residents of care homes for a few years now and we really know that the best gift for them is the opportunity to get to know, which is the experience that enriches and strengthens” says Jolanta Juškevičienė, President of the RC “Karalienė Luizė”

The embassy of the Netherlands in Lithuania had invited the soldiers to join this social initiative.

This initiative is part of the campaign “For a Secure Lithuania” (lit. “Už saugią Lietuvą”), initiated by the President of the Republic of Lithuania. 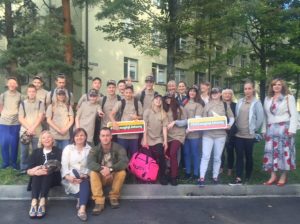 The debates give rise to truth and destroy myths

We are rolling out our desire to change Lithuania further. We take part in the discussions about child custody and adoption – we try and use the opportunity to tell about the initiatives of the club’s sisters to break myths about children from care homes, help the residents, and look for those who want to take care of the children.

Let’s go play cooking games with children! You will be convinced the children are wonderful! 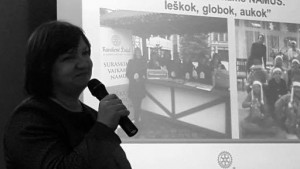 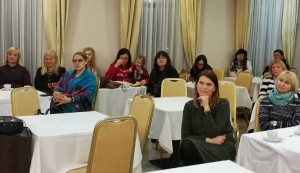 During the Christmas season, we go to the Theater Square. We talk to people about custody of children and invite foster families to donate. For donated funds and donations from club members, we give children meaningful gifts: in 2017 we handed out symbolic passes to summer camps to ten care home residents. Each child got 150 EUR funds for a freely chosen camp. In 2018, five new laptops were handed over to foster children, which will be used by seven children in the final grade. Students, that are already considering their path of life and profession are pleased that the equipment they need will be able to provide for both education and entertainment.

THANK YOU to the Rotarians and all the good people who have supported our initiative and donated funds. 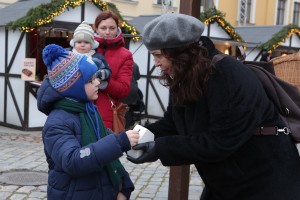 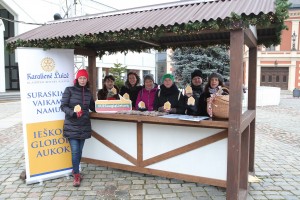 The conference revealed problems and inspired 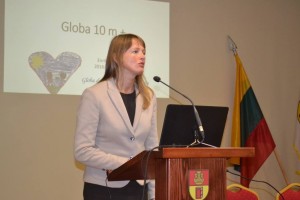 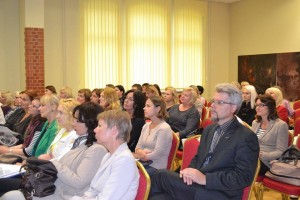 The topic of child adoption and custody is often plagued by myths and indifference. The idea of children’s custody is aggravated by myths and unreasonable fears in society, and the families who have already adopted children are lacking understanding and support not only from the public, but also to the authorities. Such problems were expressed by Klaipėda Rotary Club “Karalienė Luizė” in the conference “Children’s Care in the Family: Myths and Reality” (lit. “Vaikų globa šeimoje: mitai ir realybė”) in September of 2016. The participants of the were guardians, child care specialists, and publicists.

The conference brought together more than 80 people, interested in children’s welfare and custody from Vilnius, Klaipėda Region, and even such remote towns as Joniškis and Žagarė.

One of the organizers, our club member Enrika, who takes care of two teenage boys, urged all specialists of foster care in Lithuania to cooperate in the search for foster families for children, because, according to her, there are no unwanted children, there are only undiscovered families.

“The conference has provided us with more information, an understanding of what custody is, how it differs from adoption, and why the custody and adoption procedures are so slow. We also realized how much work is required to change the stereotypes in society, when helping custodians in their difficult but noble mission,” says Virginija Beliauskienė, President of the “Karalienė Luizė” Rotary Club. Julija and Romanas Gaiduk, who are raising 5 children, of which only one is biological, mostly emphasized not the difficulties that are faced when integrating a new member into the family, but the still intolerant response of the community, especially the nursery home community, to foster children. “We were pushed out of the kindergarten, because our child did not fit, in ‘posed a threat’ to other children” – Roman shared his experience.

A family with this diverse background is convinced that custodians should be given the opportunity for a maternity/paternity leave in the first year of child custody, regardless of the age of the child.

“The time when a child adapts to a family is very important. Especially for teenagers – they need special care and control “- confessed Gaiduk.

Today’s renowned artist Remigijus Gataveckas, who has grown up in a child care home, has called for more frequent visits to children, spending time with them, finding potential custodians, and promoting a non-obligatory friendship with the care home residents. “Visit, play, talk to those children, even without the purpose of adopting or caring. For the children it is very necessary “- encouraged Remigijus.

We are convinced that our society should help healing the old wounds of the state. Consequently, Klaipeda Rotary Club “Karalienė Luizė” is joining the initiative of the President of the Republic of Lithuania Dalia Grybauskaitė “For a Secure Lithuania” (lit. “Už saugią Lietuvą”), which calls for joint efforts to change Lithuania.